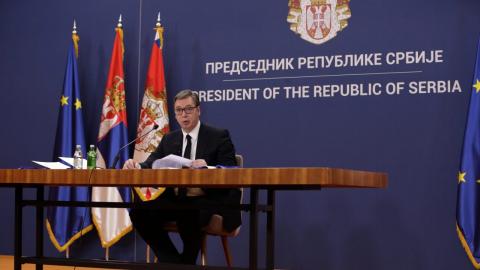 Serbian President Aleksandar Vucic condemned the Kosovo government's latest decision about licence plates for Serbs living in northern Kosovo, claiming its goal is "to expel Serbs, especially from the north of Kosovo and Metohija". He said Kosovo's goal was "to make a new Storm", referencing the Croatian army operation in 1995, codenamed Storm, that forced most Serbs to flee Croatia.

"Their Interior Ministry will campaign to persuade Serbs [in Kosovo] to register with so-called RKS [Republic of Kosovo] licence plates," Vucic said. "And if they [Serbs] are not convinced, they will take away not only their license plates but also their vehicles … so then…  they reckon that all the Serbs will leave", he added.

But Vucic insisted that the September deadline "means they [Kosovo] are planning a general attack on northern Kosovo by October 1 at the latest, which they will call whatever they want".

The Kosovo government also decided that from now on, "every person that presents themself to cross the state border with personal identification documents issued by Serbian authorities will be equipped at the border crossing points with a declaration form that temporarily replaces the usage of such document".

Violeta Haxholli, from the Kosovo-based think tank Kosovo Democratic Institute, KDI, told BIRN that the latest decision of Kosovo government was no more than "implementation of the points of the agreement on freedom of movement reached between Kosovo and Serbia in July 2, 2011".

Haxholli said Kosovo had never until now implemented the agreement on issuing temporary...