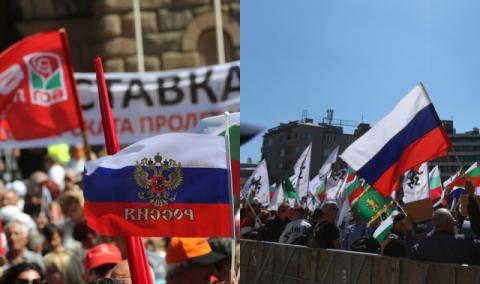 In June, eight parties received enough support from voters to enter parliament, and in three of them, those who sympathize with Bulgaria's alliance with Russia and Belarus outnumber those who support the European Union and NATO. In just one of them, more than half are about to turn to Moscow and Minsk, which together attacked Ukraine four months ago.

It is curious that this is not "Vazrazhdane", but the Bulgarian Socialist Party (BS). To the question "If there is a new division in Europe, similar to the Cold War, where should Bulgaria be positioned?", 56% of BSP supporters point to the answer "In alliance with Russia, Belarus, etc.".

This shows part of a nationally representative public opinion poll conducted in the field between 6 and 16 June 2022 by Alpha Research. The data are published on the website of the Open Society Institute - Sofia, which commissioned the study, looking for an answer to the question of where respondents see Bulgaria if we live in a world of new division in Europe, similar to that of the Cold War.

The parties with dominant attitudes among voters for an alliance with NATO and the EU above the 4% threshold for entering parliament are: