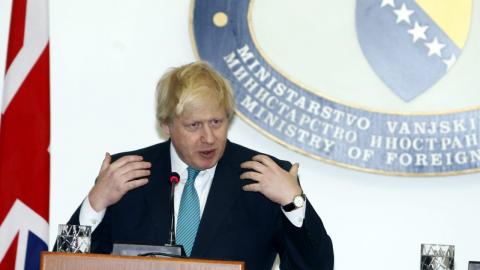 Boris Johnson during his visit to Sarajevo, Bosnia and Herzegovina in April 2017. Photo: EPA/FEHIM DEMIR.

Boris Johnson during his visit to Sarajevo, Bosnia and Herzegovina in April 2017. Photo: EPA/FEHIM DEMIR.

At the request of NATO Headquarters Sarajevo, a UK military counter-disinformation expert and a civilian strategic defence adviser will be deployed to Bosnia to support and train its armed forces.

Bosnia and Herzegovina is widely seen as facing the greatest threat to its existence in the post-war period, with secessionist leaders actively working to create conflict - backed by Moscow as part of Russia's plan to undermine stability and Euro-Atlantic integration in the region.

The goal is to bolster the NATO HQ and Bosnia's own ability to resist malign influences and block the attempts to undermine democracy in Bosnia and the region. "We cannot allow the Western Balkans to become another playground for [Vladimir] Putin's pernicious pursuits," Johnson said.

"That is why we are stepping up support to Bosnia and Herzegovina, answering the call from our friends to help protect the peace they so rightfully deserve to enjoy," he added.

The UK also plans to allocate £750,000 to establish a cyber-security centre within the University of Sarajevo in order to effectively fight cyber-attacks prior to general elections.

The UK also plans to work closely with local media and institutions to equip them with tools to identify and mitigate the effects of lies and disinformation.

This UK decision came on the last day of the NATO Summit in Madrid, where Bosnia's representatives also took part.