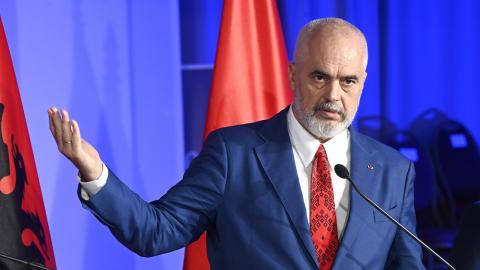 Albania plans to license private production of cannabis "for medical and industrial use" for companies that have experience in the field in the EU, so joining a list of some 30 countries that allows the practice.

A draft law published on Thursday on the public consultation website states that the government aims to license the production of cannabis for up to 150 hectares of land starting from 2023.

Interested companies must have capital of more than 100 million leks (8 million euros) and will be supervised by a state entity created for the purpose.

While medical marijuana production is allowed in dozens of countries, including several EU members states, the move is considered more controversial in Albania, where the illegal growth of cannabis and its smuggling to other European countries has been a major crime issue.

Currently, some 40 per cent of the country's prison population has been sentenced for drug crimes.

Enkelejd Alibeaj, an opposition MP, called the move "madness" that according to him will ease the further production of cannabis for the purpose of trafficking under the guise of medical use.

"Edi Rama is the only Prime Minister in the EU whose former Interior Minister is in prison exactly due to connections with drug traffickers," Alibeaj wrote on Facebook.

"Everybody knows that in a country where criminality and corruption is very high, keeping such activity under control is next to impossible," he added.

Albania has a long history of cannabis growing and trafficking since the collapse of Communism three decades ago.

For some 15 years, up till 2014, Lazarat village in southern Albania became "the European capital of cannabis growing", an area where police didn't dare enter and which was...