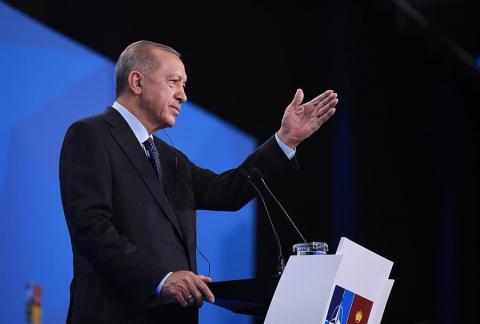 The deal Türkiye, Sweden and Finland agreed in Madrid is just the beginning of the two Nordic states' process to join NATO, President Recep Tayyip Erdoğan has said, underlining that Ankara will closely follow the implementation of the promises outlined in the document in regard to the intensified fight against terror.

"Of course, promises are important, but for us, the implementation is more important. We are moving cautiously as a country that has been stabbed in the back heaps of times in its fight against terrorism. We will, therefore, follow very closely whether these words are kept," Erdoğan told reporters on his return from Spain following the NATO leaders' summit.

Türkiye lifted its objections to Sweden and Finland's bid to join the alliance after they formally agreed to fight against the presence and activities of the terror organizations on their lands. This includes the PKK, its Syrian offshoot, the YPG, and FETÖ, responsible for the failed coup attempt in 2016.

"In addition, the trilateral memorandum we signed with Sweden and Finland will also guide our allies in terms of solidarity against terrorism. Afterward, it will be much more difficult for members of the PKK and FETÖ to conduct terrorist propaganda, attack our citizens, threaten people and vandalize the cities," he said.

There is a need for time to see to what extent the items of the memorandum will enter into force, Erdoğan said, adding, "But we should also know that the fact that this document is signed does not mean that the process is over. I guess some are worried about it. No, nothing is over yet. This is an invitation that launches a process. It is not sure how long it will last."

Erdoğan suggested that the terror organizations such as the PKK, PYD/YPG...