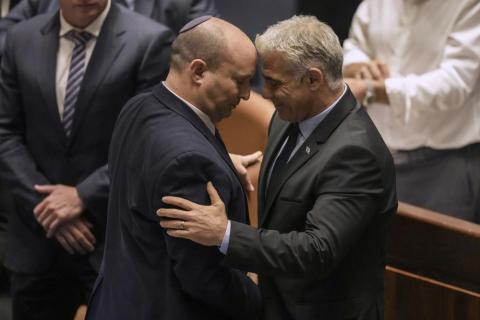 Israel's parliament voted Thursday to dissolve itself, triggering the country's fifth election in just over three years and thrusting veteran politician Yair Lapid into the role of interim prime minister as he tries to persuade a deeply polarized nation to embrace his centrist vision.

Polls indicate it will be a difficult road for Lapid to defeat his main rival, former Prime Minister Benjamin Netanyahu, a divisive figure who is at the heart of Israel's protracted political crisis. The election is set for Nov. 1.

Lapid, a former author, newspaper columnist and TV host, was the architect of the outgoing coalition government, an alliance of eight diverse parties spanning the Israeli political spectrum that was bonded largely by their shared antipathy toward Netanyahu. The coalition ended the 12-year reign of Netanyahu, who was Israel's longest-serving prime minister.

As with the previous four elections, the upcoming vote promises to be another referendum on Netanyahu, who is adored with cult-like reverence by his admirers and reviled with equal strength by his opponents. The elections focused on his fitness to lead at a time when he is facing criminal charges of accepting bribes, fraud and breach of trust. He has denied any wrongdoing.

The current government collapsed just over a year after it was formed due to infighting and a string of defections. As part of their power-sharing deal, the current prime minister, Naftali Bennett, will step aside for Lapid, who officially takes office Friday. Bennett will not run in November.

In Israeli politics, no party has ever singlehandedly captured the 61-seat parliamentary majority in parliament required to form a government. Instead, the leader of the party who can cobble together a majority...