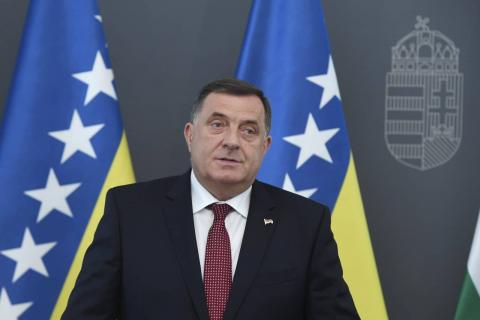 Milorad Dodik, the Bosnian Serb leader and Serbian member of the tripartite state presidency, will not be running for a second mandate in October, he has clarified.

Instead, Dodik, who has been sanctioned twice by the US and once by the UK, will be running for the post of president of Bosnia's Serb-majority entity, Republika Srpska.

Instead, his SNSD party's candidate for the presidency post will be Dodik's ally, the current Srpska president, Željka Cvijanović. She has also been put on a UK sanctions list for undermining Bosnia's stability and for being "a Russian puppet".

Cvijanovic's main rivals for the presidency post from Republika Srpska will be Vojin Mijatović of the Social Democrats, SDP, Nenad Nešić of the DNS and Mirko Šarović of the Serbian Democratic Party, SDS, who was also sanctioned by the US.

When it comes to the Bosniak member of the presidency, Bakir Izetbegović, leader of the main Bosniak party, the Party of Democratic Action, SDA, who already served as a member for two mandates in 2010-18, is also coming back. The son of Bosnia's late first president, Alija Izetbegovic, is considered the strongest Bosniak politician in the country.

His main opponents will be Denis Bećirević from the SDP, who is backed by a coalition of more than 10 parties, and Mirsad Hadzikadic who represents a coalition called "Država" ("State").

The current Croatian member of the presidency, Željko Komšić, will seek a fourth mandate in October. His main opponent will be Borjana Krišto, from the Croatian Democratic Union, HDZ, who will be backed also by Croatian National Assembly, a union of Croat parties in Bosnia and Herzegovina.

Dragan Čović who was expected to run instead of Krišto, and the loudest advocate of changes to...