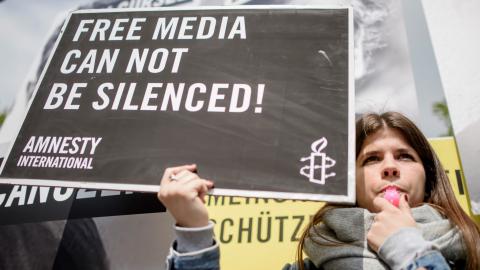 A protester blows a whistle and holds a slogan by Amnesty International reading, 'Free media cannot be silenced' near the Turkish embassy in Berlin, May 3, 2017. Photo: EPA/CLEMENS BILAN

"I do not believe that there are good intentions here. One must be very naïve to believe that the government is doing this to prevent misinformation. Their record is known, as is what they are capable is known," he said.

Sener recalled that Turkey ranked in a lowly 149th place among 180 countries in terms of press freedom in Reporters' Without Borders latest Press Freedom Index.

The draft law for the first time defines "spreading misinformation on purpose" as a crime.

It introduces penalties for anyone who "publicly disseminates false information regarding internal and external security, public order and the general welfare of the country, in a way that breaches the public peace, simply for the purpose of creating anxiety, fear or panic among the population".

Baris Altintas, the chairperson of the Media and Law Studies Association, MLSA said: "The basic question legally is here how we define fake news and lies. According to this law, it is definitely not by any objective or scientific standards. It is clear that it [the law] is going to an abuse when and if it passes in October."

Turkish media organisations described the new #disinformationlaw as "the heaviest censorship law in the history of Turkey which will completely destroy the freedom of the press".

Set the reminder to participate in our discussion tonight at 20 CET https://t.co...