Head of Eros reunites with its sarcophagus 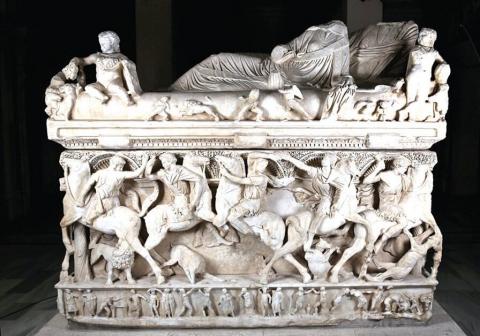 Discovered 140 years ago and taken to England from Türkiye, the Eros Head was put in its place at the Istanbul Archaeology Museum as a result of the initiatives of the Culture and Tourism Ministry.

The artifact, which was brought to Türkiye on June 10, was reunited with the historical Sidamara Sarcophagus to which it belonged.

The Sidamara Sarcophagus is considered one of the largest sarcophagi of the ancient world. The sarcophagus, which is weighing tons, was discovered in 1882 in the ancient city of Sidamara in Ambar Village of the Central Anatolian province of Karaman by British Military Consul General Charles Wilson. The sarcophagus was buried under the ground again because it was too heavy to be carried. Sometime later it was understood that it was "Eros Head," one of the reliefs separated from the sarcophagus, that had been taken to London.

The sarcophagus, which was rediscovered by a villager in the ancient city of Sidamara in 1898, was reported to the Müze-i Hümayun, which is now the Istanbul Archeology Museum.

As a result of the Ottoman archaeologist Osman Hamdi Bey's investigations in the region, the giant sarcophagus was decided to be moved to the museum in Istanbul. Then it was carried to the center by buffaloes under the conditions of the time.

The magnificent work, which made a grueling journey in specially arranged train wagons, reached the Istanbul Archaeology Museum in 1901.