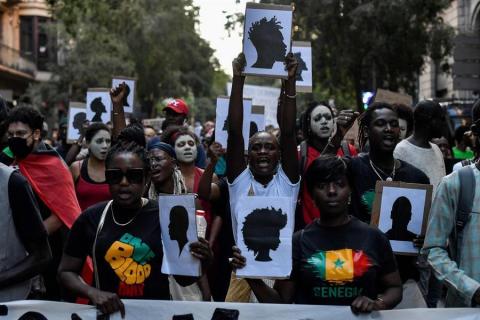 Thousands of people in several Spanish cities protested on July 1 over the deaths of at least 23 migrants last week at the frontier between the Spanish enclave of Melilla in Africa and Morocco, amid growing calls for an independent, cross-border investigation.

The demonstrations were being held under the moniker "Las Vidas Negras Importan" in Spanish or "Black Lives Matter" in English.
The deaths occurred June 24 during repeated attempts by sub-Saharan migrants and asylum seekers to scale the border fence separating the territories. Moroccan authorities said the migrants died as a result of a stampede but protesters are blaming officialsand Europe's migration policies.

In Madrid, demonstrators filled Callao square and held signs that read "Borders Kill" and "No human being is illegal." In Barcelona, participants marched as they chanted against racism and colonialism.
"In order to protect their borders they killed a lot of Black people," said Victoria Munoz, a protester of African descent.
In Rabat, the capital of Morocco, some 40 people held placards splashed with red paint, emulating blood to demand justice for the dead migrants.

"The least we can do is voice our outrage and demand that the Moroccan state stop acting as Europe's border police, because through this nefarious activity it is accountable for what occurred last Friday," said Al-Tayeb Madmadh, a member of the Moroccan Association for Human Rights and one of the protest organizers.
Videos and photos that emerged in the days following the deaths sparked outrage and condemnation by several human rights groups and officials, including the United Nations secretary-general.
In one video shared by the Moroccan Human Rights Association dozens of young African...