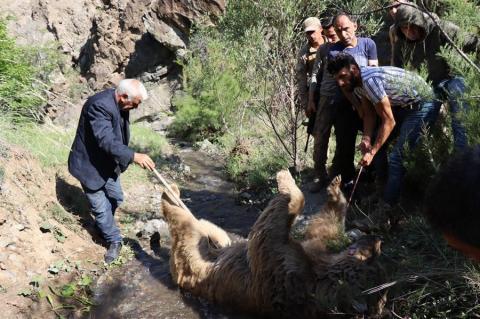 In an incident that was first of its kind, a bear that killed a man in the eastern province of Erzurum, died later due to gunshot wounds, the Demirören News Agency has reported.

Fatih İlhan, a 44-year-old father of five, took his goats to grass in a rural region in the province's Olur district on June 29.

After hours, the animals returned to the barn on their own without İlhan leading them.

The worried family called on the security forces and a massive search effort began on land and air.

It did not take long for the gendarmerie units to find İlhan's dead body, which was torn and damaged with large scars.

After seeing the shepherd's rifle on the ground, the units started searching the area and found a dead bear, which was shot in the chest, some 100 meters away.

The officials then concluded that the bear attacked the goats while grazing and to protect them, the shepherd shot it with his rifle.

The bear, then, desperately, attacked the shepherd and killed him, but succumbed to death due to the gunshot wound at a stream bed.

"It seems, the bear died while drinking water," the agency noted.