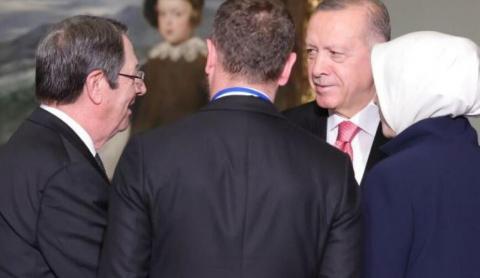 According to CNN Türk, Anastasiades came side-by-side with Erdoğan in a NATO Summit in Madrid, Spain, twice last week.

The first stand-up meeting was arranged by French President Emmanuel Macron, and the second one was a short conversation before dinner.

Anastasiades uploaded photos of him with Erdoğan on his social media accounts amid the summit.

When asked by journalists about what they talked about as he arrived on the island after the summit, Anastasiades said he asked for a meeting with Erdoğan.

However, Erdoğan refused the offer and said, "Come to North Cyprus, let's meet there," inviting him to the island's northern country, which is not internationally recognized.

Saying that such a thing would be impossible, Anastasiades turned down the offer and ended the talk, CNN Türk reported.

"Greek Cypriot politicians often ignore North Cyprus and want direct talks with Türkiye," the broadcaster said. "Anastasiades followed the same path. In the past, he made such calls, but all his offers were turned down by Türkiye."

The broadcaster hinted that by putting the meeting offer on the island's agenda, Anastasiades admitted that he was "turned down by Türkiye" once again.

Anastasiades made a speech at a dinner with European Union countries' leaders at the NATO Summit and underlined his wish for the Cyprus talks, which were stopped in 2017, to resume.

"The negotiations based on a Cyprus Federation halted in 2017. We want the...