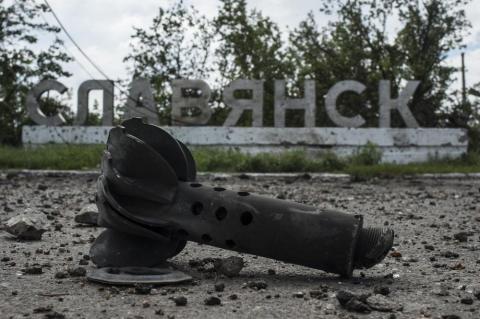 A group of young off-duty Ukrainian soldiers gathered at a military distribution center to enjoy a rare respite from the fighting that has again engulfed their fractured home in eastern Ukraine.

As they shared jokes and a pizza, artillery explosions could be heard a few kilometers away , a reminder of the looming battle that threatens to unfold here in the city of Slovyansk, which was occupied by Russian proxy fighters in 2014.

"Everyone knows that there will be a huge battle in Slovyansk," said one of the soldiers, who could not be named for security reasons.

Now, eight years after their city was last occupied, the war has returned. Slovyansk could become the next major target in Russia's campaign to take the Donbas region, Ukraine's predominantly Russian-speaking industrial heartland, if Moscow captures Lysychansk, the last remaining Ukrainian stronghold in Luhansk province, 70 kilometers (43 miles) to the east.

Another soldier, a 23-year-old accountant who joined up when the invasion began, said Ukrainian forces simply do not have the weapons to fight off the superior arsenal of the approaching Russian army.

"We know what's coming" he said with a sad smile.

These soldiers were still teenagers when pro-Russian separatists captured and held the town for three months. The brief occupation in 2014 terrorized Slovyansk, where dozens of officials and journalists were taken hostage, and several killings took place.

Fierce fighting and shelling broke out when the Ukrainian army laid siege to the city to recapture it.