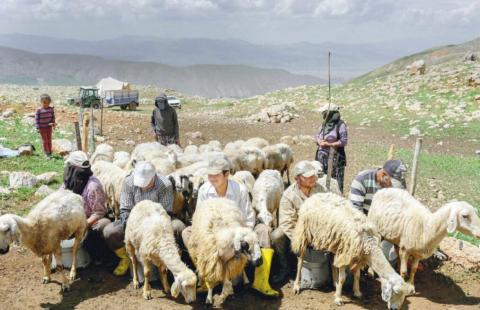 Now, with two decades of conflict behind them, some are thinking of going back, no matter the resurgent Taliban's hardline rule.

"Nobody would leave their country unless they had to," says Hafiz Hasimi Meymene, a 20-year-old with a fiancee impatiently waiting for him in Afghanistan.

"We come here, make money through shepherding, and send it to our families," he said.

A handful of nylon tents are tied down to the hard ground around him, the Afghan families' new homes.

A few men crouch in a shed, milking their sheep and goats. Their friend ushers the flock into in a pen with a whack of a slender stick.

"Next year, I will return to Afghanistan. The war is over," Meymene said.

"When the (Afghan) state was fighting the Taliban, the economy was hit hard. But now we are planning to return."

The 67-year-old works alongside them, making cheese and yoghurt from sheep's milk.

"I mean, our children either cannot or do not want to do this job," he said looking up from his stool, tending to some steaming pots over an open flame.

It is surprisingly dangerous work.