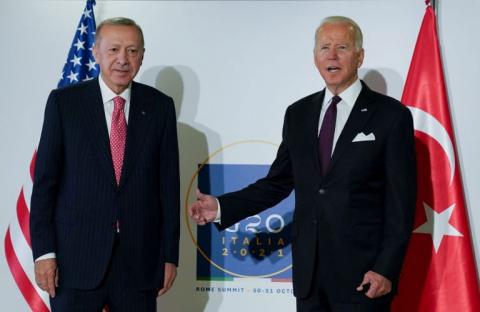 The threats of the Turkish president, Recep Tayyip Erdogan, to derail the Summit with his agenda for the Aegean, the Greek islands, their demilitarization and American bases on Greek soil - by extension - were not something the US could ignore.

All this took place during a summit that aimed at bringing the allies together in the face of a new Cold War and establish, firstly Russia, and secondly China as the alliance's chief adversaries. Erdogan seized on the importance of this juncture to put the squeeze on the West.

Greek-Turkish relations are an extremely powerful card in the Turkish president's hand, which, as it appeared, he has no intention of exhausting, yet. He simply used it to leverage the memorandum signed between Turkey - Finland and Sweden, putting a pistol on the negotiating table.

Erdogan in Madrid aimed to win a match against Sweden and Finland, with Jens Stoltenberg appearing as a biased referee, in favor of Ankara. And he succeeded. However, Erdogan did not play the Greek-Turkish relations card at the NATO Summit. He may have desisted, after US pressure, as shown by the announcement of the White House, that Biden and Erdogan discussed the need for "stability" in the Aegean.

The Aegean and Biden

According to Greek sources, Biden's message was clear. According to Erdoğan again, he noted his  displeasure both in relation to the demilitarization of the islands and American bases on Greek soil.

Turkish analysts, however, emphasized through articles in state media, such as Anadolu news agency, that Erdogan had no intention of derailing the NATO Summit in the first place, and this should be clear to anyone who had studied Ankara's role in NATO since...