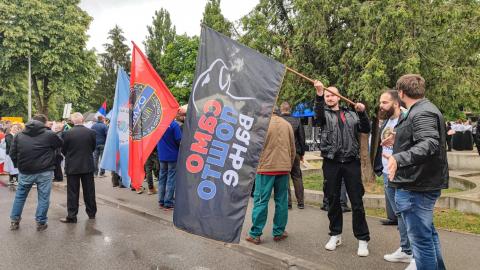 It commemorates the issuing of a decree in May 1992 by the wartime Bosnian Serb authorities in Prijedor, which was announced on Radio Prijedor, telling all non-Serbs to mark their houses with white flags or bedsheets and to wear white armbands when going outside - an incident that has become symbolic of the deadly campaign of persecution in the area at the time.

Last year there was a White Armband Day march through Prijedor. But this year, the authorities declined to give it a permit.

Self-Respect and another right-wing nationalist group from Prijedor, a youth organisation called Principle (Princip), do not have many members. But over a couple of years before the event was denied a permit, they had staged a relentless online campaign to get the authorities to ban the White Armband Day march, one of the most prominent events commemorating the wartime suffering of non-Serbs in the area.

To find out how they worked for the ban, BIRN analysed all the social media posts published by the two nationalist groups, as well as examining a series of events that they organised and documentaries that they made, and speaking to some of their members.

The two groups announced this year that they would hold several public gatherings in Prijedor on May 31, the date on which White Armband Day is marked.

Members of Principle said that they planned to hold a march to celebrate the birthdays of right-wing Hungarian Prime Minister Viktor Orban and Zeljko Mitrovic, the owner of Serbian pro-government channel TV Pink, as well as the fifth anniversary of the inauguration of Serbian President Aleksandar Vucic.

The Prijedor police department decided that allowing all these gatherings on the same day would cause "a serious danger of violence". The...