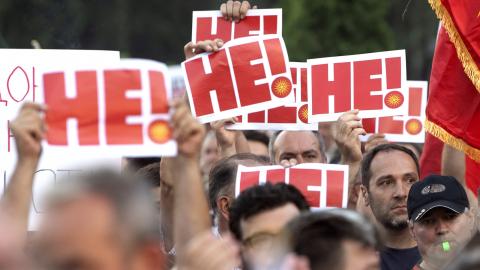 The draft proposal France sent to North Macedonia last week to unclog the country's EU accession talks, by removing the Bulgarian blockade over history and identity issues, is to be sent to the parliament, a meeting between the partners in the ruling Social Democrat-led coalition on Sunday decided.

But some smaller parties in the alliance have briefed that they did not give blank support to PM Dimitar Kovacevski, which is why common ground will be sought at a parliament plenary session, where they said they would file amendments.

The smaller parties said they told the PM that inclusion of the bilateral disputes between Skopje and Sofia in the EU negotiating framework, as per the proposal, was unacceptable.

They have demanded clarification about whether the yearly reports regarding progress on the historical and educational differences between the two countries would be part of the negotiating framework.

France sent a revised version of its plan to North Macedonia last week at the end of its rotating EU presidency.

"The key for us is to see the bilateral protocol [with Bulgaria] and whether those yearly progress reports are in fact referring to progress in talks on the history and education issues. If they are, we cannot accept and negotiate with the EU on something which is a bilateral problem," the head of the small Democratic Renewal, DOM, party, Maja Moracanin, told media after the meeting. "But the protocol is still being prepared and there is no final version," she added.

Under their 2017 friendship agreement, Bulgaria and North Macedonia set up a joint history commission and agreed to issue other cooperation and issue yearly protocols on progress. The fear now is that these bilateral issues would, in indirect form,...