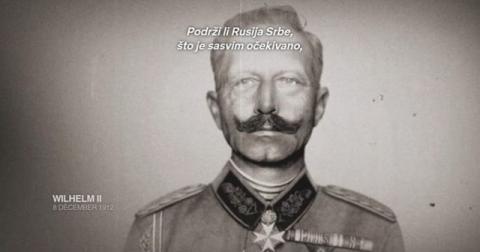 The production company Paradox Film points out that it had particularly good ratings in the Nordic countries, reaching ninth place in the Netherlands, sixth in Sweden, and eighth in Croatia on the list of the 10 most watched films.
"This is important news for Serbian cinematography and Serbian historiography," a press release of the production company Paradox Film said.
The documentary features a number of prominent historians (John Rohl, Hew Strachan, Dominc Lieven, Annika Mombauer, Oleg Airapetov, Georges-Henri Soutou, Lothar Hobelt, Stig Forster, Jean-Paul Bled, Alan Asked, Dusan Batakovic) talking about the events leading up to World War 1.

The documentary was first aired on Netflix on June 28, the anniversary of the assassination of Austro-Hungarian Archduke Franz Ferdinand by Bosnian Serb nationalist Gavrilo Princip.
It has been showing in 30 European countries where Netflix has an audience of some 70 million subscribers and will be available for viewing for the next five years.
It was made with support from the Serbian Culture Ministry and the Film Center of Serbia in 2018. The Long Road to War won awards at a number of international festivals on all continents.