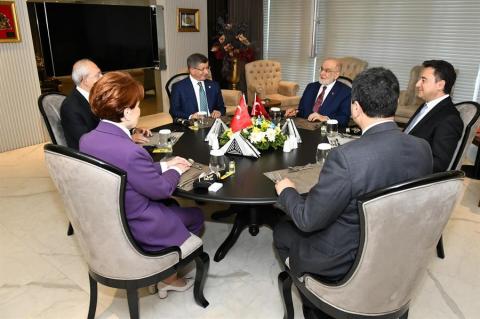 The opposition alliance has argued that a tripartite agreement with Sweden and Finland over their admission to NATO has no concrete value other than being used for internal politics.

"The last example of lack of aim and vision that has been observed in Turkish policy for some time was seen once again at NATO's Madrid summit. The tripartite agreement, which has no binding force on Türkiye's rightful demands of concrete guarantees, has no value other than its use as a domestic policy material," read a joint statement issued by six opposition leaders who held their fifth in-person meeting on July 3.

The leaders of the Republican People's Party (CHP), the Democracy and Progress Party (DEVA), the Future Party, the Felicity Party and the Democrat Party came together at a working luncheon hosted by İYİ (Good) Party chair Meral Akşener.

They criticized the memorandum of understanding Türkiye signed with Sweden and Finland, which stipulates harsher and concrete anti-terror measures in return to be admitted to the NATO alliance, on the grounds that it is not a binding deal.

"In this frame, we will conduct the foreign policy based on national interests and not on personal interests. We will make Türkiye the strongest and respected country in its region," the statement read.

It also repeated the commitment of the leaders to build "Türkiye of Tomorrow" when they come to power by running the economy through rational ways.

In response to the calls by the government for declaring the presidential candidate against President Recep Tayyip Erdoğan, the leaders said their efforts to build the future of this country cannot be reduced to the announcement of the candidate. "We, once again, declare that the 13th president of Türkiye will be...