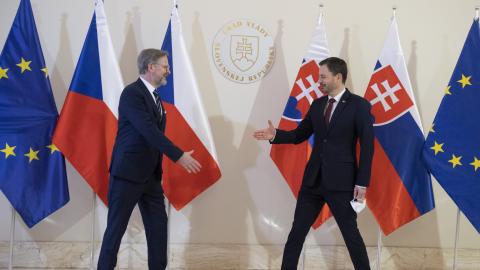 The four countries of the bloc - Poland, Hungary, Czech Republic and Slovakia - have never developed a common foreign policy in the 31 years of the existence of the bloc, which emerged in 1991 to help facilitate the region's accession to NATO and the EU. Instead, especially at the EU level, they have tried to coordinate their positions on various EU-related matters. Yet the Slovak foreign minister said he feels that Hungary, whose presidency of the group has just come to an end, often made it sound like there was such a policy in place.

Hungary, Slovakia's southern neighbour, is becoming increasingly isolated in the EU for its autocratic rule and anti-EU politics pushed by the ruling Fidesz party, as well as for Orbán's continued close relationship with President Vladimir Putin during Russia's invasion of Ukraine. At times, the Hungarian prime minister has seemed to regard the regional grouping as a way to amplify his vision of Europe.

"Attempts to ideologically use the V4 brand harm mutual trust and don't contribute to building a strong Central Europe in the EU," argues Mateusz Gniazdowski, an analyst at the Centre for Eastern Studies.

The war has also made Hungary an outcast within the V4. Before the invasion, it could rely on Poland's support in its various battles with Brussels. In both countries, the European Commission remains concerned over the state of the rule of law and democracy. In 2020, Poland and Hungary even attempted to block the EU's budget because it linked the disbursement of funds to the adherence to the rule of law.

These dividing lines not only tarnish the name of the V4 but also work against the interests of Slovakia and the Czech Republic, Korčok said in mid-June. "It's time to focus on specific projects that...