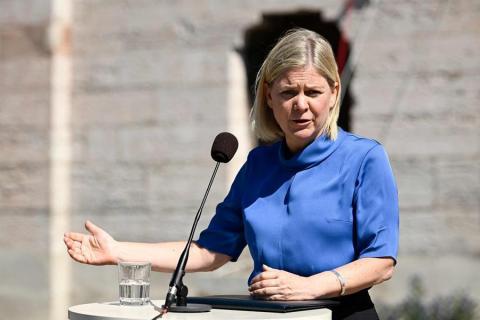 Swedish Prime Minister Magdalena Andersson on July 3 vowed to abide by the recent agreement with Türkiye, including pledges on extradition of terrorists.

Magdalena Andersson refused to deny Türkiye's statement that it had promised to deport individuals sought by Ankara as part of Stockholm's efforts to join NATO.

"I've been a minister for eight years and I never talked about what is said in the negotiation room," she said.

"(That) actually puts me in a bit of a difficult situation right now," she added.

In an agreement signed by Stockholm and Helsinki at a NATO summit in Madrid on Tuesday, the two Nordic countries agreed to examine Turkish extradition requests "expeditiously and thoroughly".

Turkish President Erdoğan on Thursday said at the end of the NATO summit that Sweden had made a "promise" to extradite "73 terrorists" and threatened to block NATO membership if the commitments were not met.

Andersson, who was pressed several times on Sunday to say whether such a promise had been given, simply repeated Stockholm's position.

"If you are not involved in terrorist activities, there is no need for concern," she said.