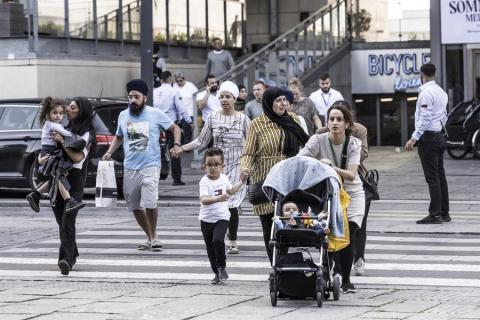 A gunman killed three people and wounded several others in a shooting at a busy Copenhagen mall on July 3 as panicked shoppers said they ran for their lives.

A 22-year-old Danish man was arrested after the shooting but his motives were unclear, police said.
The shooter, who was believed to have acted alone, was known to the police "but only peripherally".

"He's not someone we particularly know," Copenhagen police chief Soren Thomassen told a news conference after the rare mass shooting, the first since February 2015.
The young man, who according to witnesses was armed with a large rifle, was arrested peacefully shortly after police

arrived at the large Fields shopping mall, located between the city centre and Copenhagen airport.
"There are three dead and several injured, three of them in critical condition," Thomassen said.
The three dead were a man in his forties and two young people whose ages were not specified.

On social networks, people had been speculating about a racist motive, or some other motive, the head of the investigation said, "but I cannot say that we have anything which supports that at this moment."
Police however confirmed they were investigating videos posted online which claimed to show the suspect with weapons and pointing a gun at his head.
Images from the scene showed parents carrying their children as they fled the building and ambulance personnel taking people away on stretchers.

The shooting occurred around 5:30 pm, causing panic in the mall. Many visitors were there for a concert with British singer Harry Styles at the nearby Royal Arena, which was cancelled.
"My daughters were supposed to go see Harry Styles. They called me to say someone was shooting. They were...