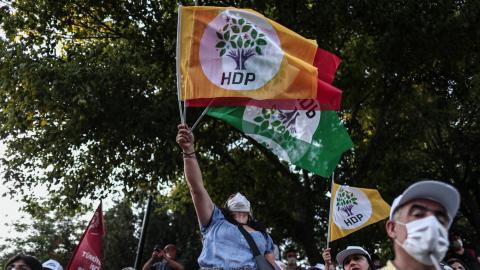 Supporters of the HDP shout slogans during their march against the arrest of pro-Kurdish People's Democtaric Party HDP parliamentarians in Istanbul, 18 June 2020. Photo: EPA-EFE/SEDAT SUNA

Ankara Chief Public Prosecutor's Office on Sunday said that it had launched an investigation due to the slogans chanted at the congress. "An ex officio investigation was launched concerning the crime of 'making propaganda for a terrorist organization,'" the office announced.

It added that four people were now in custody. "The processes of identifying all suspects continues," the statement added. The HDP press office in Ankara said it was closely monitoring the process.

At the party congress, the HDP elected co-chairs, board members and other senior party positions. Co-chairs Pervin Buldan and Mithat Sancar were re-elected for another two years.

"We would like to thank all our friends from Europe, North Africa and the Middle East who attended our 5th Ordinary Grand Congress. Once again our congress turned into an internationalist meeting. You have strengthened us. Long live international solidarity!," the HDP said in a statement.

The HDP is the main pro-Kurdish party in Turkey and the third largest party in the Turkish parliament.

President Recep Tayyip Erdogan's government accuses it of having ties with the outlawed Kurdistan Workers' Party, PKK, which has been fighting Turkish governments for decades seeking greater Kurdish autonomy.

Many HDP politicians, including the party's former co-chair Selahattin Demirtas, are in prison due to their alleged ties with the PKK.