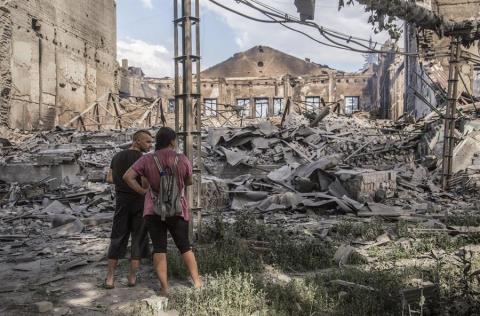 The Ukrainian army retreated from the strategic city of Lysychansk on July 3, as Russia claimed a major victory by seizing control of the entire eastern Lugansk region.

The Ukrainian withdrawal followed weeks of fierce fighting and marked a decisive breakthrough for Moscow's forces more than four months after their invasion and after turning their focus away from the capital Kyiv.

Lysychansk had been the last major city in the Lugansk area of the eastern Donbas region still in Ukrainian hands and this frees up Moscow's forces to advance on Kramatorsk and Sloviansk in neighbouring Donetsk.
President Volodymyr Zelensky had earlier denied Russian claims of Lysychansk's fall before the Ukrainian army announced the retreat on Sunday evening.

"The continuation of the defence of the city would lead to fatal consequences" in the face of Russia's superiority in numbers and equipment, the army said in a statement.
"In order to preserve the lives of Ukrainian defenders, a decision was made to withdraw.
"Unfortunately, steel will and patriotism are not enough for success -- material and technical resources are needed."
Russian forces seized Lysychansk's twin city of Severodonetsk last week following weeks of intense fighting.

The latest blow to Ukrainian resistance came after Australian Prime Minister Anthony Albanese on Sunday pledged further military support including armoured vehicles and drones during a meeting with Zelensky in Kyiv.
In an address late Sunday, Zelensky vowed Kyiv would fight on and ensure the military had "the most modern weapons".
"It requires many negotiations, but we will ensure such a supply. Ukraine will reach the level when the fire superiority of the occupiers will be leveled."