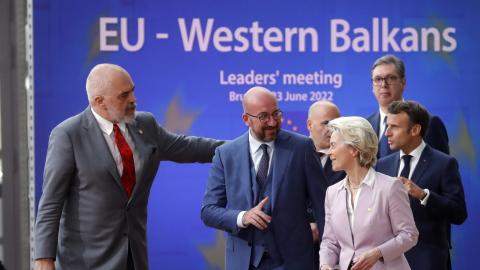 The EU enlargement process in the Western Balkans has been on 'life support' for the best part of a decade. Has the spectacular failure of the recent Western Balkans Summit, held on June 23 on the side-lines of the bigger European Council meeting, finally laid it to rest?

In his opinion piece for Balkan Insight, our senior editor Srecko Latal makes precisely this argument. He takes a look at how EU enlargement in the Western Balkans got to this sorry point and what its demise could mean for the region.

If there is one country in the Western Balkans still hoping to sneak into the EU, below the radar, then this is Montenegro. Given its small size and lack of bilateral problems, many supporters of enlargement believe that Montenegro, just about, has a realistic chance of doing so.

In our interview this week, we talk to Gordana Djurovic, a university professor and former minister in charge of EU integration, about Montenegro's long road to accession. Djurovic offers a realistic assessment of where Montenegro must do better if it is to have any chance of achieving its EU dream.