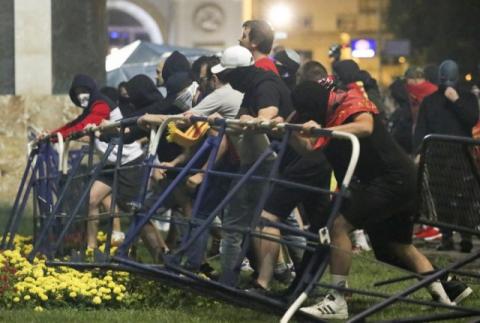 Another evening of protests in Skopje against the French proposal to start negotiations for the Republic of North Macedonia for membership in the European Union. Tensions rose after about 30 hooded demonstrators began throwing bombs and hard objects at the parliament building and police officers. 47 police officers were injured and 11 protesters were detained.

Prime Minister Dimitar Kovachevski commented on the excesses during the protests of the past few days, comparing them to the atrocities in the Macedonian parliament in 2017.

Last night's march started earlier in front of the government building, passed over the Vardar River bridge, and then past the Ministry of Internal Affairs building, where there were also calls for the resignation of Foreign Minister Bujar Osmani.

The protest is supported by the largest opposition party VMRO-DPMNE and was organized against the background of the visit of the President of the European Council, Charles Michel. He was in Skopje to urge politicians and the public to accept the French proposal.

"This opportunity is too important to be missed. We have never been so close before. Macedonians, you have the historic opportunity to say yes. Yes to the start of negotiations, yes to the EU, yes for our children," pointed out Charles Michel.

Macedonia's parliament must rule on the proposal by the end of the week.