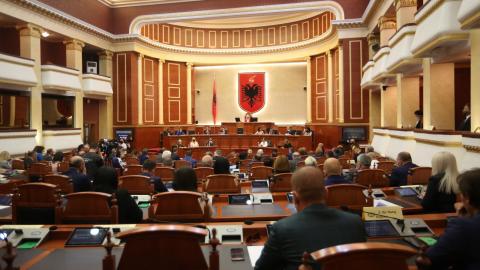 MPs in the Albanian parliament voted unanimously on Thursday to support a resolution honouring the victims of the Srebrenica genocide, ahead of the anniversary next week of the July 1995 massacres of some 8,000 Bosniak men and boys by Bosnian Serb forces.

The resolution also declares July 11, when annual commemorations are held in Bosnia, as a day of remembrance in Albania.

It says that it "confirms Albania's position that denying the genocide committed against the Bosniak population of Srebrenica by Bosnian Serb forces constitutes a violation of international law, and promotes the phenomenon of impunity for war crimes and violations of the dignity of more than 8,000 civilians who were massacred in Srebrenica".

It also condemns the "glorification of the authors, creators and supporters of this genocide", as well as the killings and rapes of ethnic Albanians by Serbian forces during the Kosovo war.

Foreign Minister Olta Xhacka said during the parliamentary session on Thursday said "some events should not be used or misused for political agendas".

"Therefore I support this proposal and call on my colleagues to vote to approve it all together, out of respect for the victims. Respect that can never be shown by using this tragic event as ammunition for political debates," Xhacka added.

But opposition MP Tritan Shehu criticised the resolution, which was proposed by the governing Socialist Party, saying that there had been no consultation about its content.

"We have a very confusing resolution, incomplete, unclear," Shehu said.

The resolution's progress towards a vote has been marked by political squabbling between government and opposition.

A resolution condemning the Srebrenica genocide was initially...