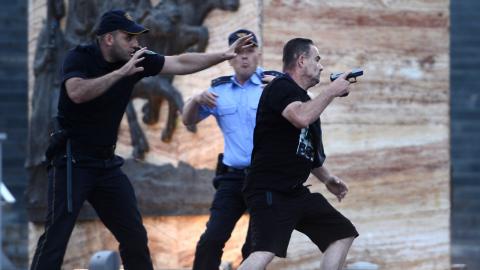 North Macedonian police said they arrested a person who held a handgun and fired shots in the air at Thursday night's protest against the acceptance of a French proposal aimed at unclogging North Macedonia's stalled EU accession talks.

Police said they arrested the man at the site of the incident in the capital, Skopje, where opposing groups of ethnic Macedonian and Albanian protesters collided. They said they found fired empty shells at the site.

"Yesterday, at around 20.10, in front of a bank opposite the Skanderbeg monument, a police officer arrested E. J. aged 40 from Skopje, who had previously fired handgun shots in the air while a group of protesters were walking from the Government towards the Foreign Ministry," a police press release on Thursday said.

The scuffle between the two groups happened at the entrance of Skopje's old Bazaar, as the large group of protesters were marching along their predetermined route.

The scuffle involved brawls and an exchange of rocks and other hard objects, as police tried to de-escalate the situation. Shortly after, a larger police force arrived and separated the two groups.

Media photographed at least two persons holding handguns, one pointing a gun at the protesters. Several gunshots were heard.

The identity of the second person was not officially revealed, although media speculated that he was an owner of a nearby hotel that had been damaged.

The inter-ethnic incident sparked a heated exchange between the political parties.

The main opposition VMRO DPMNE party, which has been staging the rallies against the French proposal over the past five days, accused the government of plotting the incident to deter people from going.