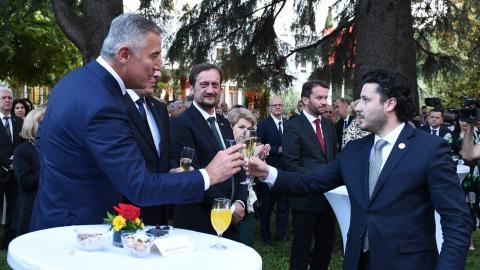 After the government voted in favour of a controversial fundamental agreement with the Serbian Orthodox Church on Friday last week, the largest ruling party, the DPS, on Sunday said the government no longer had its support. It also called on other parties to support a non-confidence vote in Prime Minister Dritan Abazovic's cabinet.

Zlatko Vujovic, head of the Centre for Monitoring and Research, CEMI, a think tank, said the government could survive, despite the announcements of a no-confidence vote.

"There are expectations that three blocs [which won seats in the August 2020 elections] could support Abazovic's cabinet. Salvation for this government could come from the Serbian Orthodox Church, which will influence the Democratic Front and 'Peace is Our Nation' bloc to save Abazovic," Vujovic told the daily Pobjeda.

The agreement with the Serbian Orthodox Church was supported by 13 ministers from the PM's Black on White coalition, the pro-Serbian Socialist People's Party and ethnic Albanian parties.

Five ministers from the DPS, the Bosniak Party and the Croatian Civic Initiative were against the decision, while three ministers were absent.

The DPS on Sunday announced the non-confidence initiative, accusing the government of voting for the agreement without offering a wide social dialogue.

"By changing government priorities, the opportunity to ensure the strengthening of the consensus of civil, pro-European politics was missed, and instead, the old divisions in Montenegro were strengthened completely unnecessarily and self-destructively," the DPS said.

Parties that announced no...