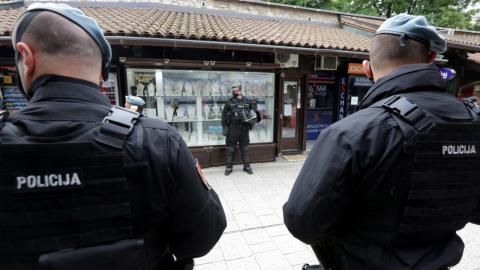 In an operation codenamed "Rez" ("Cut") Bosnian police on Tuesday arrested Elvis Kelmendi, son of the controversial Kosovo-born figure Naser Kelmendi, and six other suspects, for organised crime in connection with international smuggling and illegal trafficking in drugs as well as other crimes.

"According to the collected evidence …  the suspects acted as an organised criminal group with divided roles and tasks," Bosnia's State Prosecution stated on Wednesday.

"The group smuggled and sold large quantities of narcotic drugs on the illegal drug market of Sarajevo and other cities over a long period of time," the report added.

"The flows of money acquired through illegal activities, as well as the forms of corruption activities of the suspects, are being investigated within the investigation," the report continued.

Police arrested Kelmendi junior in the coastal town of Neum with two members of his group while at the same time police in Sarajevo Canton arrested four other members of the same group.

Elvis Kelmendi is a son of Naser Kelmendi. The Basic Court in Pristina, Kosovo, found him guilty of  running a narcotics operation - but acquitted him of murder and other charges - jailing him for six years. However, the guilty verdict was annulled by the Court of Appeal in August 2018.

A Kosovo Albanian with Bosnian citizenship, he was arrested in Kosovo in May 2013 based on an international warrant arrest issued by Bosnia. Since Bosnia and Kosovo have no diplomatic relations or extradition agreements, Kelmendi was tried in Kosovo only. However, he faces charges in Bosnia as well.

His trial in Kosovo began in January 2015, when he was charged with aggravated murder, two counts of organised crime and six counts of the sale...