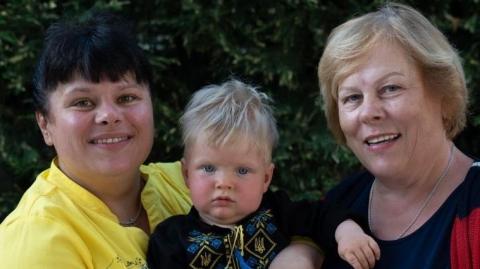 "He later sent me photos of our house, which was burned," she tells BIRN in an interview at a hotel in Albania's port city of Durres, on the Adriatic. "We have basically nothing now," she adds.

Yatsenko, 31, was a professor of Economics Sciences at the Department of International Trade and Marketing of Vadym Hetman University in Kyiv. She reached Durres at the end of March along with her mother and infant child.

The city's Diama Hotel is now sheltering 334 refugees from the war in Ukraine, supported by the Ukrainian embassy in Tirana and Multifunctional Community Centre in Durres, a local NGO.

Yatsenko said Ukrainian diplomats in Tirana helped them get to Albania. She knew little about the small Mediterranean country but has found it surprisingly good.

"I found a fantastic climate and very welcoming people," she says. "I feel like it's my second home - after my first home in Irpin was burned to the ground."

A girl looks at the sun setting on the seaside beach of Gjiri Lalzit, near Durres, Albania, 11 February 2017. Photo: EPA/ARMANDO BABANI

Yatsenko is one of some 5 million refugees that have left Ukraine since the start of the war on February 24, according to the UN.

Most of them are women, children and the elderly; men of fighting age are forbidden from leaving the country.

Data published by the UN High Commissioner for Refugees, UNHCR, say at least 4,600 civilians have been killed in the war so far, including 320 children.

At 7pm on a summer's day in Durres, the restaurant at the Diama Hotel is filling up with women and children of all ages.

Due to the heatwave, the veranda is the preferred place to enjoy supper while catching a refreshing breeze. Children are the first to be served by...