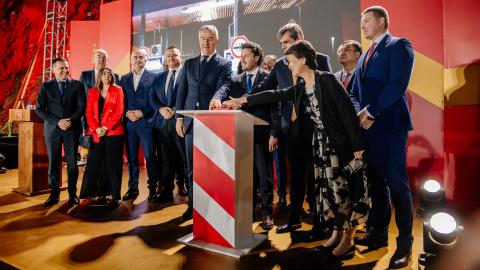 On Wednesday, Prime Minister Dritan Abazovic opened the first section of the highway, seven years after the Chinese-financed project started and drove up Montenegro's public debt to 90.85 per cent of GDP.

Dejan Milovac, from the prominent watchdog MANS, said the project was not transparent from the start, calling on the government to disclose the precise costs of the first section.

"Even though the first section is finally finished, after almost seven years, we still do not have detailed and reliable information on how much the project cost and what the reasons for the delays were. We are also not informed whether the state adequately protected the public interest in the deal with the Chinese investors," Milovac told BIRN.

"There was a lot of room for corruption, and authorities should present information about the financing of the highway," he added.

The first 41-kilometer-long phase was built by the Chinese Road and Bridge Corporation, CRBC. It was 85-per-cent financed by a $810-million-loan from China's Exim Bank.

In 2018, CRBC asked for another 115 million euros for subsequent works as well as the construction of a water supply and electricity network on the highway, which were not precised in the contract.

The first phase was to finish by November 2019. but completion was delayed three times due to technical issues and the COVID-19 pandemic.

On July 7, Minister of Finance Aleksandar Damjanovic said the project was implemented without parliamentary...