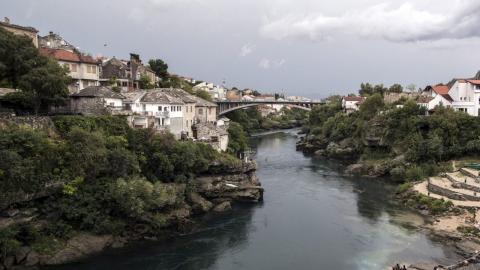 Six streets in the southwest Bosnian city of Mostar named after people linked to the fascist Independent State of Croatia, NDH, in World War II, are to get new names.

High Representative Christian Schmidt, who oversees the civilian implementation of the peace deal that ended the 1992-5 Bosnian war, welcomed these changes, saying that new names "transcend divisions and inspire a sense of pride in every citizen of Mostar".

He called upon other cities and municipalities in Bosnia that also have controversial street names or names of public institutions "to follow the example of Mostar and do the same".

The US embassy in Bosnia also welcomed Mostar's new street names in a press release.

"It is time for other cities in Bosnia and Herzegovina, especially Sarajevo and Banja Luka, to follow the example of Mostar and change the names of the streets that belong to dishonourable individuals in their neighbourhoods," the embassy stated.

As they said, this change will improve the international image and reputation of Mostar.

Twenty-five out of 35 members of the City Council voted for these changes. However, Irma Baralija, a member of the council, wrote on her Facebook profile that for her "it is devastating, and even insulting, that the commission made up of five party leaders decided not to name a single street after a woman."

Baralija, as well as members from other political parties, have suggested some women's names, but they have not been taken into consideration.

Mostar has been de facto divided between Croats and Muslim Bosniaks since the end of the 1992-5 war.