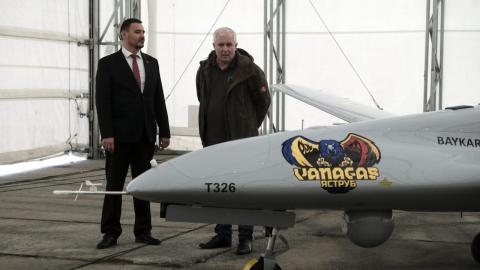 Poles have so far raised about 14 of the 22.5 million zloty (4.6 million euros) needed to buy a Bayraktar TB-2 drone for Ukraine.

The auction, which was started on the fundraising website zrutka.pl by left-wing public intellectual Slawomir Sierakowski, has proven popular, with prominent individuals, such as Oscar-nominated director Agnieszka Holland and Gazeta Wyborcza editor-in-chief Adam Michnik, endorsing it.

In May, Lithuanians set an example when they raised the money needed to buy a Bayraktar for Ukraine in a matter of days. In June, Baykar, the Turkish private manufacturer of the drone, announced it would donate the machine to Lithuania so that the money raised by that country's citizens could instead be used for humanitarian aid to Ukraine.

Sierakowski, the initiator of the Polish fundraiser, said it was the Lithuanian example that inspired him. In an interview published in Gazeta Wyborcza on July 15, Sierakowski said "his eyes lit up" when he heard about Baykar's decision to donate the drone for Ukraine to Lithuania. "This is an opportunity," Sierakowski recounts thinking. "Maybe the company will behave in a similar way and then our help would be doubled."

The weapons manufacturer is owned by Selcuk Bayraktar, the son-in-law of Turkish President Erdogan. It has been deployed to deadly effect in Libya and Syria and in the second Nagorno-Karabakh war of 2020 where it played a key role in ensuring Armenia's defeat by Azerbaijan.

Lithuania Stopped the Transit of Russian Vodka to Kaliningrad