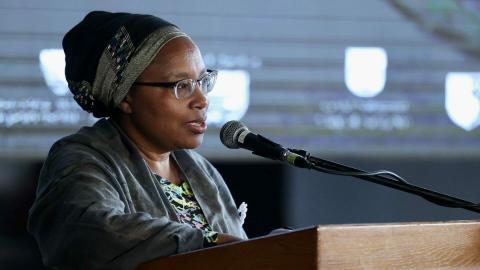 "The International Criminal Tribunal for the former Yugoslavia rendered a decision, a final decision, that genocide happened here," she said.

"It is often called the crime of all crimes and it is extremely important to gather on its anniversary at the place where it happened," she added in the interview, which took place one day before the marking of the anniversary of genocide in which more than 7,000 people, predominantly men and boys, were killed. More than 40,000 women, children and elderly were deported.

Nderitu said that during her previous visit to Bosnia, she was worried because she heard in the news and on social media that genocide was still routinely denied and criminals glorified in Bosnia.

After last year's commemoration, former High Representative to Bosnia and Herzegovina Valentin Inzko moved to stop this, imposing an amendment to the criminal code to outlaw the denial of genocide and other war crimes and glorification of convicted war criminals.

Alice Wairimu Nderitu at the conference commemorating the anniversary of the genocide in Srebrenica in 2022. Photo: Srebrenica Memorial Center.

The UN special advisor says the law is of extreme importance, protecting all people in Bosnia, which is not the first country to have such a law.

"I heard allegations that this law has divided people in Bosnia and Herzegovina. Even prior to this law, when I came here, while it was still discussed, people were divided. It is not the law that has divided them," she said.

Nderitu says all politicians should accept these amendments to the law, as politicians influence the opinion of people and the hate speech they use can encourage the dehumanization of people.

"They are described as sub-humans … And when we...