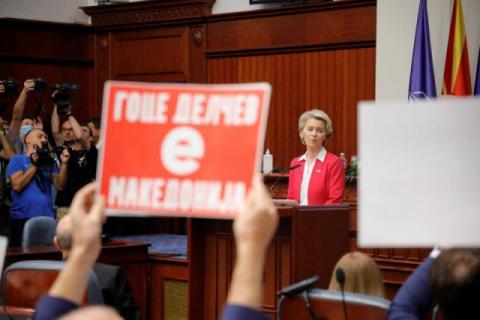 North Macedonia must take a step forward towards the European Union, European Commission President Ursula von der Leyen told the Macedonian parliament ahead of a meeting where lawmakers are debating the so-called "French proposal" to start EU negotiations.

Von der Leyen concluded her address to the Macedonian MPs with a quote from the late President Boris Trajkovski:

She emphasized that the Macedonian language and Macedonian identity are recognized by the European Union.

Negotiations for North Macedonia's membership in the EU could start as early as next week if the country decides to support the French proposal. The intergovernmental conference could start in a few days. The President of the European Commission also said this before the Assembly in Skopje. Her words that the interpretation of history was not part of the negotiation process were met with applause.

It is expected that the proposal will gather a majority - 70 parliamentary votes in the 120-seat parliament.

While Ursula von der Leyen delivered her message from the rostrum of the Parliament, opposition MPs stood with posters and T-shirts reading "NO!".

There were also posters with the inscriptions "People's traitors", and a member of the left had even put a sheet with the inscription "NO!" on the tribune in front of the President of the EC. In the plenary hall of the Parliament, the opposition side not only did not applaud Von der Leyen,...