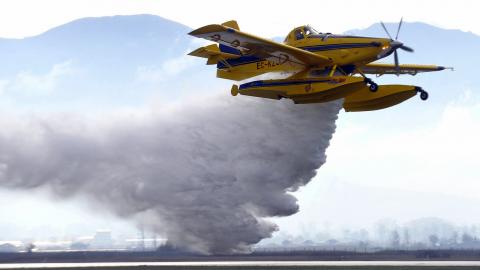 High summer temperatures in South-East Europe traditionally go hand in hand with forest fires in the region. Last summer, as in many previous years, different corners of the region were devastated by drought and wildfires.

Each year, governments chastened by their inability to tackle forest fires effectively pledge that next year will be different, and that they will be better prepared. Yet as the zenith of the summer drought approaches, our regional analysis finds that only a few countries in the region are anything close to well prepared to fight any potential wildfires.

People sing patriotic songs in front of Nirth macedonia's parliament, surrounded by the current and the old country flags. Photo by BIRN

An 'eleventh hour' proposal drafted by the French Presidency of the EU was intended to create the space for lifting the Bulgarian veto on North Macedonia's EU accession negotiations. In so doing, it would also pave the way for opening accession negotiations with Albania, which the EU has rather arbitrarily lumped together with North Macedonia, effectively making the country a collateral victim of their neighbours' bilateral dispute.

Yet while the 'French proposal', as it has become known, may have been well intentioned, it was anything but well received by much of the Macedonian public. Seething after years of feeling unjustly pushed around by the EU and individual neighbouring member states, ordinary Macedonians seem in no mood for more concessions, particularly on core identity...