Op-ed: Greek-Turkish relations: What is the best solution in the final analysis? 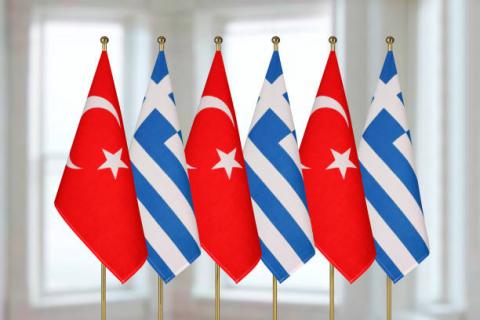 The relationship between Greece and Turkey is a difficult one. It is not the only such, but in any event geography does not change.

If one follows the media over time on both sides of the Aegean one will get the impression that we are speaking of two peoples that view each other with fanaticism.

Especially of late, with the rhetoric of the Turkish government having become extremely bellicose, the country's opposition not only maintains that climate, but even accuses Turkish President Recep Tayyip Erdogan of "concessions", and the country's mass media seeks angles that can light a fateful fire.

Similarly, in Athens, words often lose their meaning. Readers have become accustomed to the phrases "extreme provocations" and "even more extreme rhetoric".

This monopolises the agenda and it comes across that Turkey totally dominates Greek foreign policy, although that is not the case.

Newspapers report on Turkey almost every day. It is noteworthy that it is frequently the lead story on front pages and that it consumes a large portion of the limited time of television newscasts, even if we agree that it is Ankara that steadily provokes and fuels tensions with Greece, with greater consistency and continuity.

With such a backdrop, words such as "solutions", "dialogue", "cooperation", and "consensus" seem like a distant and difficult prospect.

In such an environment, public opinion becomes imbued with a "war-like climate" and acclimated to high-pitch rhetoric and an unwillingness to budge.

All that makes it even more difficult to speak the truth.

Harsh words that lead to even tougher solutions...