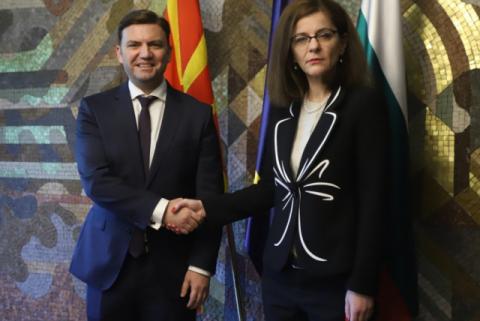 The foreign ministers of Bulgaria and North Macedonia signed the bilateral protocol to Art. 12 of the Treaty of Friendship, Good-Neighbourliness and Cooperation.

The document will form part of Skopje's negotiating framework for EU membership and contains measures for the history, hate speech and culture curricula.

After the signing ceremony, the resigned Minister of Foreign Affairs, Teodora Genchovska, noted that at the meeting of the intergovernmental commission this morning, progress was reported in all five sector groups.

"Bulgaria is the country that most strongly supports the European integration of the Republic of North Macedonia and Albania. From here on, we wish them success on the path they have long wanted to take. I hope that with joint efforts and our support, they will reach where the citizens of the RNM most want to reach, namely, membership in the EU," said Genchovska.

The Minister of Foreign Affairs of North Macedonia, Bujar Osmani, emphasized that from today the relations between the two countries are going to a new level.

"For us, it is a historic opportunity that after 17 years of candidate status, the Republic of North Macedonia can start negotiations with the EU from tomorrow and start the last phase of our accession to the EU. We expect support from Bulgaria because this is in our interest, not only for the citizens of North Macedonia, Bulgaria is also interested in the accession of the Western Balkans," added Osmani.

With 68 votes "in favor", the Assembly of the Republic of North Macedonia yesterday gave the green light to the government to adopt the so-called "French proposal". The decision passed with the votes of the ruling Social Democratic Union of Macedonia and the Albanian...