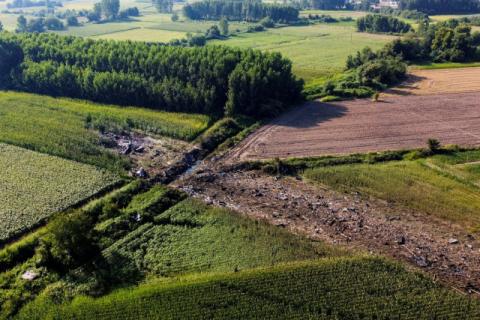 Nuclear-biological defense specialists at the plane crash site in Greece

A special team of nuclear-biological defense specialists arrived at the crash site in northern Greece, where a plane carrying a dangerous cargo crashed last night.

Next to the remains of the machine, there is a white substance of unknown origin, which the specialists are investigating. The area is cordoned off by police.

Two of the firefighters who arrived first at the scene have breathing problems.

Earlier it was reported that an An-12 cargo plane of a Ukrainian airline, traveling from Serbia to Jordan with potentially dangerous cargo, crashed last night near Kavala, northern Greece.

The authorities have blocked and do not allow anyone to approach the remains of the plane. All those working at the moment are wearing special anti-radiation suits.

The crash site is being surveyed with a drone.

The head of the fire service in Northern Macedonia, Apostolidis, announced that the firefighters are waiting for permission to continue the action. The atmosphere is laden with toxic gases, firefighters say.

Electricity and water supply in the area have been interrupted. The inhabitants of Paleochori are locked in their homes. A team of military doctors is on standby for emergency response.

The plane changed its direction over Mount Athos and headed for Kavala airport, but due to a burning engine, it did not reach the airport.

If it had fallen over a populated place, the victims would surely have been more than a thousand people, local residents report.

Ukrainian diplomats arrived on the scene to find...