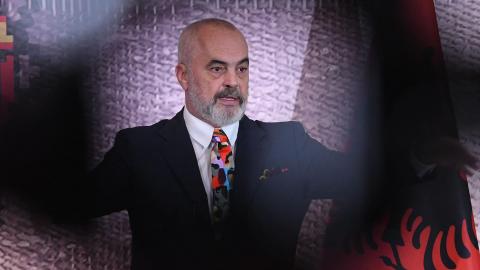 Prime Minister Edi Rama lashed out at local media after an off-duty police officer accidentally killed a child with his boat at sea, likening them to animals.

The death on Tuesday shocked the country, where many have been asking for more protection on beaches; this is not the first such case during this year's touristic season.

"Even in this case, the political-media animalism of those who wish and expect nothing but disaster to fuel the fire of their unjust and hopeless political war, was not missing!" he wrote on Twitter.

State Police late on Tuesday fired the entire chain of command of the local Directorate for Border and Migration of Vlora, "for not implementing additional measures to prevent incidents with watercraft in coastal areas".

Communications expert Edlira Gjoni on Facebook said the Prime Minister should seek forgiveness from the media he had insulted.

"What about you, a prime minister that calls us 'political-media animals'! That's what we call you too … Get over the animalism and make your deputies deal with initiatives that save, no take, lives!" she wrote.

Citizens have called for a protest meeting at the Ministry of Interior under the motto "The boat did not kill her, the state did".

Rama is well known for his battles with the media. Last month, when Albania faced another cyber attack, he attacked the media for reporting about it.

Media outlet Top Channel reported that Iran was behind the cyber attack, sending a political message to Albania, which is hosting around 3,000 exiled...