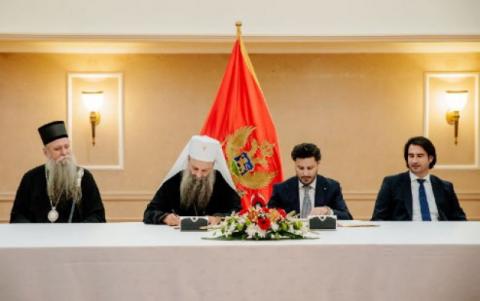 According to earlier media reports, Serbian Patriarch Porfirije arrived in Podgorica on this occasion.
The fundamental agreement was signed by the Prime Minister of Montenegro, Dritan Abazovi, and the Serbian Patriarch Porfirije.
The government did not officially announce the arrival of Porfirije, nor did it issue any statements on the issue before the signing, nor did the SPC.
Montenegrin media reported that the Serbian Patriarch Porfirije arrived in Podgorica today by plane of the Ministry of Interior of Serbia.
The approaches to the Gorica villa are blocked, and as reported by a CdM journalist, jeeps entered the villa from a side street. The police station closed the access to Villa Gorica.