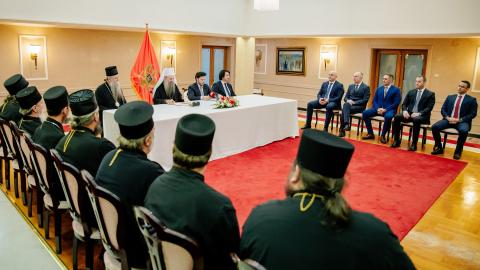 The signing of the fundamental agreement between Montenegro's government and the Serbian Orthodox Church. Photo: Government of Montenegro

Abazovic signed the agreement with Church Patriarch Porfirije on Wednesday in Podgorica, stressing that all religious communities should have equal rights.

"The process of negotiating a fundamental agreement took too long, but now this issue is finally closed in a civilized way.  The government does everything with the desire to build a society of justice and equality," Abazovic said in a press release.

"In this way, we are sending a message of peace and tolerance and the country should turn over a new page," he added.

Montenegro has signed similar "fundamental agreements" with smaller religious communities: with the Catholic Church in 2011, and with the Islamic and Jewish communities in 2012. But no agreement has been reached with the Serbian Orthodox Church.

Patriarch Porfirije said that Montenegro and SPC both needed the agreement, stressing it was in accordance with the Montenegrin constitution.

"The Church didn't want anything more than any citizen of Montenegro related to the topic of religion, nor did we have ambitions to achieve more than any other religious community. I believe all citizens are happy because of this agreement," Patriarch Porfirije told the media.

According to the agreement, the Serbian Church doesn't need government permission for relocating cultural heritage it owns but must obey the Law of Cultural Heritage Protection.

The government is obliged to register all Orthodox churches and monasteries as belonging to the SPC and also start the restitution process of Church property nationalized or confiscated by the Communist authorities after World War Two.