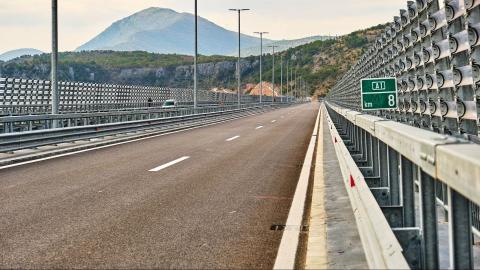 The first phase of the Montenegrin Bar-Boljare highway. Photo: Government of Montenegro

On July 13, Prime Minister Dritan Abazovic opened the first section of the highway, seven years after the Chinese-financed project started, and drove up Montenegro's public debt to 90.85 per cent of GDP.

"So far, the ministry had talks with a large number of creditors who are interested in participating or completely taking over the refinancing of loans for highway construction. The government of Hungary, through the Hungarian Exim Bank, followed by the European Bank for Reconstruction and Development, EBRD, and the European Investment Bank, EIB, showed the most interest," the ministry told BIRN.

"A feasibility study is underway, which should show the real potential costs of building the remaining sections of the highway, which will help identify potential sources of financing," it added.

On July 20, the Ministry for Capital Investments said the 23.5-kilometres-long second phase, running from Matesevo to Andrijevica, would likely cost some 552 million euros.

The first 41-kilometre-long phase was built by the Chinese Road and Bridge Corporation, CRBC. It was 85-per-cent financed by an $810-million-loan from China's Exim Bank.

In 2018, CRBC asked for another 115 million euros for subsequent works as well as the construction of a water supply and electricity network on the highway, which were not detailed in the contract.

The first phase was due to finish by November 2019 but completion was delayed three times due to technical issues and the COVID-19 pandemic.