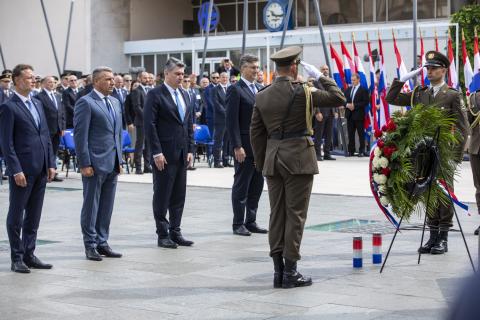 Ever since, politicians in Croatia and Serbia have commemorated different parts of those events - the parts that suit them, ignoring the arguments and victims from the other side.

Croatia celebrates a victory which ended four years of occupation of almost third of the country's territory, allowing Croatian refugees to go back home, but at the same time it ignores Serb victims. Meanwhile Serbia commemorates Serb victims of called Operation Storm, calling it the "biggest ethnic cleansing on European soil after WWII", ignoring at the same time the causes that triggered the military operation.

So for years now, every August, governments in both countries have marked the same events in opposite ways: the Croatian government celebrates and the Serbian one mourns. But both are united in their ignorance of the appeals of human rights activists from both sides, who have persistently requested the prosecution of all war crimes at the judicial level, as the essential condition for reconciliation and dialogue at the social and political level.

But courtroom justice is too slow. According to a 2021 report on unprosecuted crimes after Operation Storm by Zagreb-based NGO Documenta - Centre for Dealing with the past, in the 26 years which have passed since the operation, the Croatian judiciary has filed four indictments against nine Croatian soldiers and policemen for war crimes against Serbs.

According to Documenta, many crimes were not prosecuted at all: those committed in...