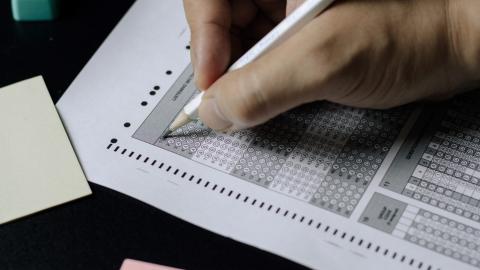 "Our report will be presented to the President. It seems that there is a problematic situation," the chair of the DDK, Yunus Arinci, told NTV TV Channel.

Some of the 2022 KPSS questions were allegedly published by a publishing house before the exam. It is claimed that more than 20 questions might have been leaked.

Halis Aygun, head of the Centre for Assessment, Selection and Placement, OSYM, the state organisation responsible for national-level exams, was dismissed by a presidential decree earlier on Wednesday.

However, the opposition, unions and students say this is not enough.

"Sacking the head of the OSYM is not enough. All activities of the OSYM should be investigated by a parliamentary commission. A criminal complaint will be filed against those who harm the public, neglect their duties and abuse their duties," EGITIM-SEN, one of the largest educational unions, said on Wednesday.

"You have betrayed the labour of our youth many times in exams and interviews. We do not accept repeats! We will follow the allegations about the KPSS and the dubious statements," Meral Aksener, the leader of the Good Party, said.

Unlike some other countries in the region, Turkey organises central level exams in many areas, including the national high school entrance exam, the national university entrance exam and public personnel selection exams. In the university exam alone, more than 3 million students compete each year.

Experts underline that knowing a question before the exam can create a huge difference and cause injustice.

The OSYM has had similar scandals before. Ali Demir, a former OSYM head, was dismissed due to...