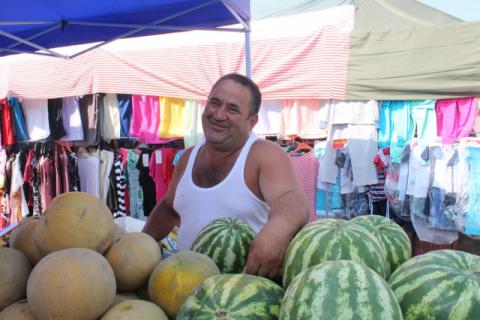 Tons of watermelons remained in the field due to lack of markets. Cheap Greek production permanently displaces native production. There is no import control by the state, costs have risen by 30-40% at double lower purchase prices. Such is the balance sheet at the height of summer of Yanko Yanev, one of the major producers in Lyubimets, Bulgaria. He cultivates 110 decares of land planted with Sorrento and Romanza varieties. The owner, who has been in the business for 10 years, said that last year the purchase price of watermelons was 30 cents per kilogram, and now it is 10-15 cents. He calculated that the average cost per acre amounts to BGN 1,000 (EUR 511,65), which means that the purchase price per kilogram should be at least 25 cents, and now it is being sold at a loss.

Despite the complex situation in the sector, Yanev manages to realize about 500-600 tons of his own production on the domestic market, mainly on the exchanges in Plovdiv and Pazardzhik, with an average yield of 5 tons per hectare.

"There are no Lyubimets watermelons in Sofia, there is no domestic production, everything has been from Greece for years. Where are the commercial chains, where is the state," asks the farmer.

"Euro subsidies for fruit and vegetable production in our country are extremely low. At the same time, in neighboring Greece, they receive much more funds from the EU for the development of the sector", Yanev said.

He emphasized another serious problem, which the state is ignoring. He is one of the few registered agricultural producers in Lyubimets, while at the same time there are many others in the shadow economy who "neither pay taxes nor insurance".

Sweet watermelons and cantaloupes were once a trademark of the...