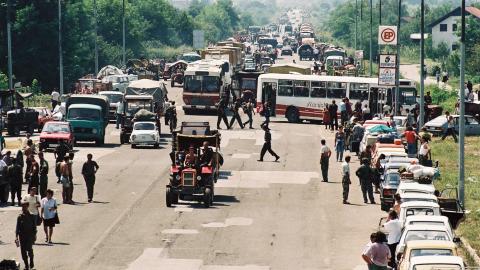 "I was in the hospital for six days, after that I wore a leg brace for a month," he added.

Some two-and-a-half years later Drca, together with many other Croatian Serbs, was forced to flee the country and come to Serbia.

Operation Storm, conducted from August 4-8, 1995, saw Croatian forces defeat rebel Serbs and oust their self-proclaimed statelet, the Republic of Serbian Krajina, which they had established on Croatian territory in 1991.

Several hundred Serbs were killed during and after the operation, according to the Croatian Helsinki Committee. Others were injured, and more than 200,000 refugees left for Serbia. None of them has ever been compensated.

Operation Storm will be celebrated this week by Croatia as a great victory that ensured that the country gained independence from Yugoslavia, while the Serbian authorities will mourn its victims.

Some of the Serbs who suffered injuries during Operation Storm or in other wartime incidents were given hope of compensation by Croatia's Law on Civilian Victims of the Homeland War, which was adopted in July 2021. Janko Drca was one of them.

In April 2022, with the assistance of Serbian National Council, which represents ethnic Serbs' interests in Croatia, Drca applied for compensation under the law. But by the end of last month, he had still not received any feedback.

Milena Calic Jelic from the Serbian National Council's legal department said that it has assisted plaintiffs to submit 70 requests under the law so far.

Calic Jelic said that the organisation is "busily working [on] finding people who are exercising their rights under the act", helping them fill out applications and directing them to the correct county or city office in order to file their claims.