Ex-Head of Bulgarian Weapons Company: In 4 months, 4200 tons of Weapons were Exported with the Signature of Ninova 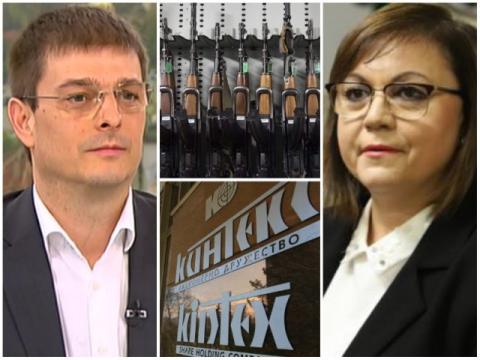 "Just in the first 4 months after the start of the war in Ukraine, 4,200 tons of weapons with the signature of Kornelia Ninova were exported, unloaded at the Rzeszow airport in Poland, 70 km away. from the Ukrainian border."

This was stated by the former head of "Kintex" Alexander Mihailov at a media briefing.

He was fired by BSP leader Kornelia Ninova while she held the post of Minister of Economy.

"For the first 4 months, from March to June inclusive, 60 planes transported Bulgarian weapons to this airport near the Ukrainian border. 60 flights in 4 months mean that every day 70 tons of Bulgarian weapons went to Ukraine. An average calculation shows, that in this 4-month period, 4200 tons of Bulgarian weapons were delivered to the Polish airport, close to the Ukrainian border. To put this in perspective, that's 212 heavy-duty trucks lined up in a column close to each other within 4 kilometers or, in other words, from 'Bulgaria blvd.' to the 'Arena Armeets' hall on 'Tsarigradsko blvd' in Sofia. Against this background, for Mrs. Kornelia Ninova to claim that she does not know where the Bulgarian weapons are going is not only an untenable statement but also insulting to Bulgarian citizens", said Alexander Mihailov.

The leader of the Socialist said today that "Radev has a male complex towards the woman who made him President of Bulgaria".