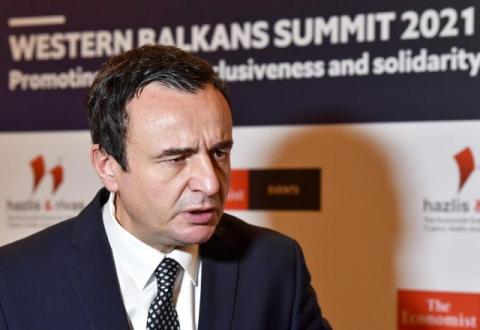 Prime Minister of the so-called Kosovo Albin Kurti responded to allegations that he is delaying the implementation of decisions on license plates and reciprocity of identity cards with Belgrade.
He pointed out that they've been waiting for the implementation of these decisions for 11 years, and now a one-month delay seems to be a problem, reports Koha.
Kurti repeated that Belgrade developed a "wild disinformation campaign" and that this was the main reason why he postponed the implementation of two Government decisions.
"What should have happened 11 years ago, we are now starting to implement. We waited 11 years, what's the rush now that we cannot wait even less than a month. Due to the large disinformation campaign carried out by Belgrade, we agreed with international factors to postpone the implementation of the decision until September. We have done a lot, but a wild campaign has started from Belgrade. With work and commitment, we will finish everything well. We are dedicated to what we are doing. In the circumstances we are in, we have made the best possible decision. Better on September 1st than never. And it would be even better if it was implemented back in 2011, when the agreement was reached in Brussels," said Kurti in the Parliament.
Kurti pointed out that the decision on license plates and identity cards was coordinated with international partners.
"These decisions will also transform the changing of the license plate from the time of Miloevi time. In addition, there must be identification for citizens entering Kosovo, the same is the case in Serbia for citizens of Kosovo. We have issued more than 2.000 documents. We have accepted the proposal of the international community that this decision be postponed because of...